To write of love is to lack vocabulary:
I could lie beside you on the night grass,
Navigating the vastness of dark and light that is sky;
Smelling the damp mother-body of the good ground;
Ears quickening to silence, to rustle; to the hum and purr of stars;
Tasting coffee to stay awake for the dancing universe

All night long, soft warm breeze on my face . . .
I could celebrate the birth of an idea, so clear, so complete-in-itself and so transient . . .
I could relax in a stillness so vast that even the quick point of attention vanishes . . .

On the way to knowing love,
We discover much that is not love, and miss so much that is . . .
To be curious about that is love too.
And so we heal, we grow, we understand.

Years ago Venerable Namgyal Rinpoché suggested a wonderful practice: to work through an encyclopedia of animals, radiating the energy of loving-kindness, metta, to each one in turn. Arriving at “pseudoscorpion,” I read about a tiny creature related to spiders whose front legs appear to be pincers. It’s not really dangerous, it just pretends to be something it is not, in order not to have to actually defend itself.

Happily pondering the ironies and similarities of human and insect life, I went for a walk in the woods, and then sat in meditation. When I opened my eyes fully, I saw a tiny black spot on the wall in front of me; a black spot that had not been there when I began my practice. Bending nearer, I could discern what seemed at first to be a fleck of ash from the fire, until it moved!

I quickly grabbed a magnifying glass and peered at it. As the image of its body was received into the form-recognition part of my brain there was a sudden expansive rush that blew me to bits: it was a pseudoscorpion, and I had just fallen head over heels in love. I carefully moved it from the wall to a lovely little home quickly created in a small box. The encyclopedia had noted that it fed on dust mites, and scrounging under the bed yielded a huge potential food source for my new love.

I attempted to convert my friends to this new fascination: “Can I show you something amazing?” I asked them, launching into the tale. They were polite at first, then increasingly distant. Finally someone became angry. “It’s a bug, Bonni! A bug! You’ve got it in a cage, with no companions of its own kind. You don’t really know whether it can feed off the dust balls from under your bed — you’ll probably kill it!”

And so, like many before me who’ve made unwise choices in love, I let my little friend go. Fondly. Respectfully. Gratefully. To this day, I feel enriched for having known and loved that little creature. But it wasn’t always so simple…

Like many of my generation, I grew up with some pretty distorted ideas about love. None of the Sunday-school teachers, none of the books explained to me why I didn’t FEEL loved. By the end of high school, I had read the Bible and all the Freud I could get my hands on (which added some new ideas about sex to the confusion). Of course, I LOVED — passionately. My dog, Tinker. My best friend, Trudy. An archeologist named Sam who was a character in a movie seen at the drive-in with my parents.

Anna Pavlova and Isadora Duncan, the (dead) dancers who were the contrasting ideals of my heart. But only my dog loved me back, really. And he was fickle: let someone else apply a can opener to a can of dog food, and I was forgotten.

What I heard on the radio (hidden under my pillow to capture far-away American stations that broadcast all night long) didn’t add much to the themes in the country-and-western music that had been the background in childhood. Because so much of my “love life” took place in a fantasy world, there was continual disappointment, and the songs reinforced all the loneliness and desperation. I was different from everyone else, I thought. No one will ever love me. I felt like Joe Blspflthck (spelling guessed-at) in the comic strip “L’il Abner,” who trudged around in a black hat and overcoat under a perpetual cloud of rain which fell only on him. It was time to grow up.

I marched in place as an eccentrically-dressed ‘love’ child. Idealism, marijuana and recreational sex served to channel the passions of the heart. Erich Fromm helped. Hindu mythology too. Perhaps there was a place where religious experience and day-to-day human life weren’t different worlds. Then came R. D. Laing:

“It is our duty to bring up our children to love, honour and obey us.
If they don’t, they must be punished, otherwise we would not be doing our duty.

Inscribed over the archway of the main aca- demic building where I went to university it said: The Truth Shall Make You Free. Reading Laing, feeling internal sensations, movements, that I had never felt before, an understanding deeper than the words-in-my head formed. I believed. I wanted to be free, and therefore, I must find out the truth.

Many blind alleys later, I learned that the hu- man heart is a doorway to a completely new cognition of love. I discovered that love is a state of being that can be developed or unfolded deliberately, intentionally and that there are actual methods — mental technologies — that reliably accomplish this. Resting in the exalted presence that is universe (the one-turning) does not depend on conditions such as myself loving some- one, or someone loving me, but rather on leaving all such distinctions behind. This doesn’t mean that love isn’t personal any more, only that it is no longer exclusive. How could it be that nothing I had read or heard in my whole life thought to mention this miracle? Had I just not had eyes to see, or ears to hear? Is it this knowing that others refer to as God?

Further discoveries followed as this realization was tested. One could use ‘other’ as a door- way too. At first the Teacher; then, thanks to Carlos Castenada, who declared that one’s great- est teachers were the “petty tyrants” in one’s life, any one at all, even apparent enemies. This is a wonder. For years I was extremely uncomfort- able in the presence of someone who, I had been told, “hated my guts.” That awkwardness re- sulted in behavior that further antagonized this person. Avoidance seemed the only strategy that didn’t trigger animosity and defense. Imagining her bathed in the heart’s radiance, it gradually became possible to relate to her in ‘reality,’ first in a neutral way, and then as if she was a friend. It was clear that she was working, in her own way, for resolution too. Our paths didn’t cross for many years. When we did meet again, I felt that she was a close and treasured companion with whom I had shared a lot of history.

The healing power accessible through the heart also helps to reclaim and transform long- denied ‘selves’ from childhood — stages of development that have been cut off and repressed because the grip of negative pain is too frightening to hold. With amazement and thankful- ness, I now ‘remember’ my childhood as quite happy and full of opportunity to explore. Ten years ago, I would have labeled it scarred by deprivation and rage and grief. Immense conviction arises from this, which helps others develop the confidence they need to heal their own unacknowledged wounds.

Further work demonstrates that universe evolves from a number of infinite, interpenetrating ‘emotional’ energy fields (or nested hierar- chies, in General Systems terms) which either come into awareness spontaneously as supportive response to a particular situation, or which can be reliably invoked or ‘tuned into’ for exploration or to provide meditative support to others. Imagine how different our reactions to personal and planetary problems would be if more of us relied on an understanding that love is not a ‘thing’ to be earned or bestowed, but simply, powerfully/potentially present in every moment!

In the open, spacious field of the heart, one can meet with beings so wonderfully different, so unimaginable and exotic, that one’s conditioned set of reference points for what is possible dissolve. And the exploration continues . . . what was learned from the pseudoscorpion applies to every one, every question, that appears in the doorway. Through the great blessing of the Teachings of Liberation, may each and every living being come to realize this great personal and universal truth. 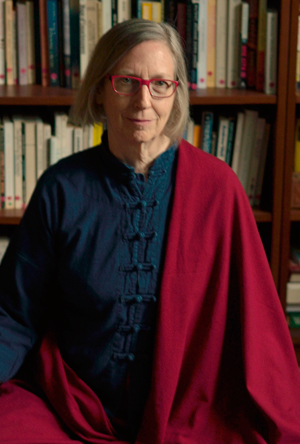 Bonni Ross brings together 40 years of study and practice in the Zen, Theravadin and Vajrayana traditions of Buddhism with motherhood, experience in holistic therapies and Western Mysteries, and a 16-year career as a communications and strategic planning consultant to business and government. She regularly teaches in Canada, California, Australia and New Zealand.